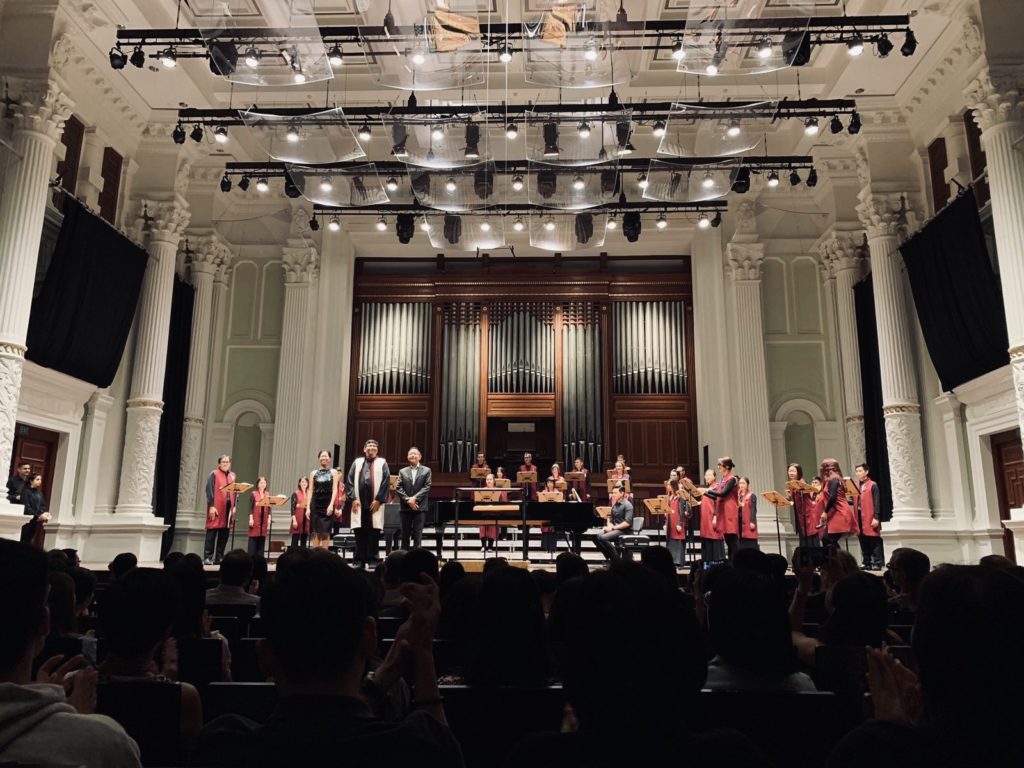 Time flies when you’re having fun, doesn’t it? 2019 marked the choir’s 15 years of existence, 15 years of music-making, and for some, 15 years of friendship. As we transit into the new year, let’s take a look at what we had been up to this year!

We started this year by launching our brand new look at Prisms!

Building on Vox Camerata’s mission of welcoming and accepting persons from diverse backgrounds, this meant our costumes had to reflect a diverse range of bodies and personalities while showcasing our identity. After months of conceptualising, our lovely costume team came up with a new look for the choir that comprises three parts: a feather brooch, a vest , and base. The base, as the name suggests, is a full-black outfit that forms the base and foundation of the look. It holds space for a versatile vest that rests above it – it is versatile because it can be used on both sides: either maroon or cream. Finally, members were given materials to build their own feather brooches by way of exhibiting their own personality while being a part of a larger community. Kudos to the costumes team for all their hard work!

Prisms 2019 was organised by our dear friend The Crescendos. Together with guest choir Creátus Chamber, Prisms 2019 paid tribute to the theme of love. Highlights of the concert included Sergei Rachminonoff’s Bogoroditse, Randall Stroope’s Amor Di Mi Alma and Tryptica Mater from the Hildegardian Oratoria composed by our Artistic Director Shah. Huge thanks to The Crescendos for extending the invitation to be a part of your debut concert!

As a non-auditioned choir, we are friends before musicians. This is why we couldn’t say no when an invite came to sing at the wedding of the daughter of one of our members! Congratulations to dear Tara and John! Here’s wishing you a happy marriage!

In March, we were honoured to be a part of the country’s biggest non-competitive singing festival Voices of Singapore for the second year. Kudos to the festival team and Mr Darius Lim for your kind invitation.

Don’t miss Voices of Singapore Festival 2020 because we will be back!
Stay tuned for the details: 17 March.

Musica Intimae: The Passing of The Year

Beyond the performance, this year’s concert was the third year where we reached out to individuals or community groups who did not have access to concerts due to financial challenges. One of these groups is the children from Tasek Jurong (above photo), and beneficiaries of Singapore Association for Mental Health (SAMH). There are many ways in which we can build an inclusive society. We’re doing it one concert at a time, and we would not be able to do it without the generous support of our patrons. Thank you!

In November, our dear friends from NUS Society Choir invited us to their annual Singathon! Together with more than 10 choirs from a diverse background (from Primary School to choirs in community clubs), we had a ball of a time making music together, dancing to choreography and performing for each other. Thank you to NUSS for this opportunity to learn and meet like-minded singers!


Christmas wouldn’t be complete without carolling in December! On 8 December, we were glad to perform two sold-out concerts at The Armenian Church. It was heartwarming to see families singing to familiar carols together with the choir (babies included!) in the afternoon’s sing-along session. The night’s concert saw the choir performing a range of choral repertoire including our Artistic Director’s arrangement of O Holy Night and the debut performance of his arrangement of Silent Night. Thank you all for spending your Sunday with us!

Finally, we spent our Christmas armed with our Santa hats and Rudolph ears while carolling through the snow at Snow City and Crowne Plaza Hotel. Thanks for having us once again!

2019 has been another fulfilling year and we couldn’t have done it without our friends, family and supporters. We are happy to announce that we are expanding! Are you looking for a singing club to join? Wanna learn a new skill in the new year?
Join us on 8 February at our Sing & Greet.

May peace be with everyone as we move into the new year. See you in 2020!

For collaborations or performance opportunities, get in touch: discovery@voxcamerata.com